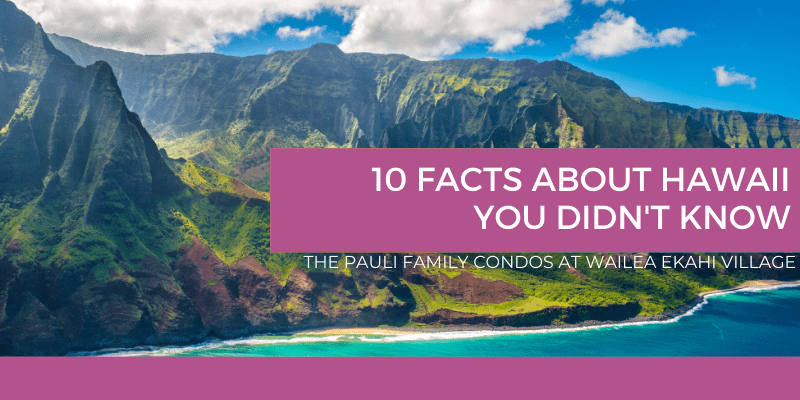 Gorgeous beaches? Check. Awesome watersports? Check. Pineapples? Check. Sure, there is a lot of things you already know about Hawaii, but we are willing to bet there are still a few things you could learn. Your friends at the Pauli Family Condos at Wailea have come up with 10 facts about Hawaii you probably don’t know.

O Hawaii no ka aina maikai – After all, Hawaii is the best land.

You may be familiar with the six main islands, but the entire Hawaiian archipelago is actually made of 132 different islands and islets.

2. Hawaii is the only state to commercially grow coffee.

If you haven’t tried Hawaiian coffee, you’re missing out! Kona, Oahu and our beloved Maui all have the US’s only commercial coffee farms.

3. Surfing and stand-up paddle boarding were invented in Hawaii centuries ago.

You may already know that surfing originated in Hawaii, but did you know that its history goes back to 400 AD?

4. Hawaii is home to the largest US National Monument.

The Papahānaumokuākea Marine National Monument was established in 2006 and spans almost 1,243 miles. Consisting of atolls, lagoons, coral reefs and submerged banks, it is larger than all other US National Parks combined.

5. Oahu is home to the largest maze in the world.

Hawaii is known for its pineapples but even more than that, the Dole Plantation is home to the largest maze in the world. Make sure you wear your tennis shoes, it’s nearly two and a half miles long.

6. There is more than one official language in Hawaii.

7. Each island has a signature color and flower.

The flowers for each island are typically used in the leis and decorations they use. Maui’s is Lokelani or the damask rose.

8. There are no billboards on any Hawaiian island.

In order to preserve the beautiful views all around the island, billboards have been banned since the 1920s.

9. Smog is rare but vog is more common.

Hawaiian air is close to pristine, so smog doesn’t affect the islands. However, volcanic haze from nearby volcanoes can cause haziness that makes for extraordinary sunsets.

10. Baby whales get to call Hawaii their birthplace.

Humpback whales make the long journey to the warm waters off of Maui’s coast each year from November to May. During this time, they give birth and nurture their young in the relaxing waters.

There are so many beautiful experiences to have on Maui. From the ocean floor to the tops of volcanoes, there is a whole new world to explore with every venture. If you’re ready to see it for yourself, book your stay at The Pauli Family Condos at Wailea today. A hui hou – Until we meet again!